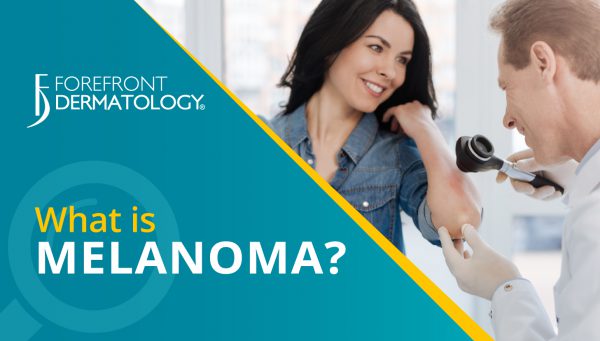 It is estimated that melanoma kills, on average, over 10,000 people in the United States ever year. Understanding what melanoma is and the warning signs, risks, and types will help you become more self-aware of what to look for. After all, early detection could save your life.

Warning Signs of Melanoma
Moles, brown spots and growths on the skin are usually harmless — but not always. According to Dr. Adam Asarch, Board-Certified Dermatologist and Fellowship-Trained Mohs Surgeon with Forefront Dermatology, “Anyone who has more than 50 moles is at greater risk for melanoma. The first signs can appear in one or more atypical moles. That’s why it’s so important to get to know your skin and to recognize any changes in the moles on your body.” Use the following letters to keep track of your moles:

A – Asymmetry: If you draw a line through the middle and the sides do not match – you have a warning sign.

B – Border: If the edge of a mole is uneven, scalloped or notched – you have a warning sign.

C – Color: If your mole is multiple shades of brown, or is black, red, white or blue – you have a warning sign.

D – Diameter: If you have a mole that is larger than a pencil eraser – you have a warning sign.

E – Evolution: If you have noticed an existing mole grow larger or change shape or color – you have a warning sign.

Causes and Risk Factors
Everyone is at risk for melanoma, but increase risk is dependent on several factors including UV exposure – including tanning beds – number of moles on the skin, skin type and family history.

• UV Exposure – Blistering sunburns in early childhood increase risk, but sunburns later in life and cumulative sun exposure also increase your chances of developing melanoma. According to the Skin Cancer Foundation, those who use tanning beds increase their chance of melanoma by 75 percent.

• Moles – There are two kinds of moles: normal moles and atypical moles. Atypical moles put you at an increased risk of developing melanoma. It is important to monitor all moles for any changes.

• Family History – Genetics plays a large role in melanoma. About one in every 10 patients diagnosed with the disease has a family member with a history of melanoma. According to the Skin Cancer Foundation, research shows if you have an immediate relative who has melanoma, you are in a melanoma-prone family –with a 50 percent greater chance of developing the disease.

Types of Melanoma
There are four basic melanoma types. “Three of them begin with in situ meaning they occupy only the top layers of the skin and may become invasive if not detected early,” Dr. Asarch explained. “The fourth type of melanoma starts off invasive which poses a serious health risk. The cancer has penetrated deeper in the skin and can potentially spread to other areas of the body.”

1. Superficial spreading melanoma is the most common type. According to the Skin Cancer Foundation, this type of in situ melanoma accounts for approximately 70 percent of all melanoma cases and grows along the top layer of the skin.

2. Lentigo maligna melanoma is also an in situ melanoma that is commonly found in the elderly as a result of long-term sun exposure.

3. Acral lentiginous melanoma is also in situ and spreads superficially before penetrating more deeply. It is quite different from the others as it usually appears as a black or brown discoloration under the nails or on the soles of the feet or palms of the hands. This type of melanoma is sometimes found on dark-skinned people, and tends to advance more often than superficial spreading melanoma and lentigo maligna because it is detected later.

4. Nodular melanoma is usually invasive by the time it is diagnosed. The malignancy is recognized when it becomes a bump. It is usually black, but occasionally is blue, gray, white, brown, tan, red or skin tone. This is the most aggressive of the melanomas, and is found in 10 to 15 percent of cases.

Stages of Melanoma
Melanoma skin cancer is referred in stages. Early melanomas are localized and can develop deeper if undetected. More advanced melanomas have spread to other parts of the body and require extensive treatment. “With early detection through monthly self-skin checks and annual skin screenings, melanoma can be potentially cured surgically, which prevents it from reaching advanced stages” added Dr. Asarch.

Below is an explanation of the basics of each melanoma stage:

Get Checked.
Regardless of whether you have noticed an odd or changing mole, a yearly skin examination is always recommended as a preventative measure to skin cancer. The skin health experts at Forefront Dermatology are ready to see you for a simple, 10 minute skin cancer screening. To find the Forefront dermatologist nearest you, visit the locations page today. 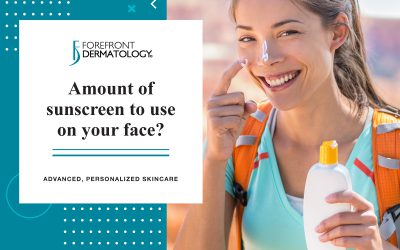 How Much Sunscreen to Use on Your Face | Forefront Dermatology 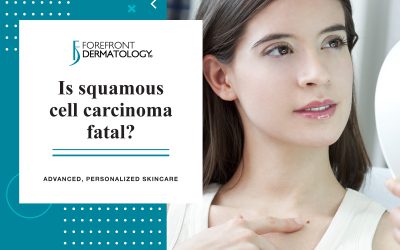 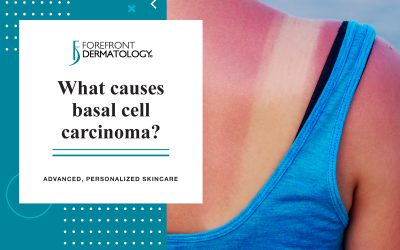 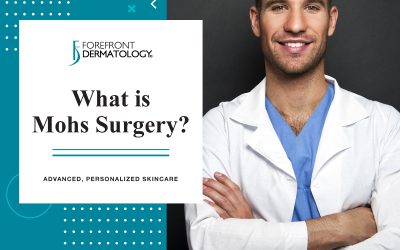 What is Mohs Surgery? | Forefront Dermatology

What Do The Early Stages of Skin Cancer Look Like? | Forefront Dermatology 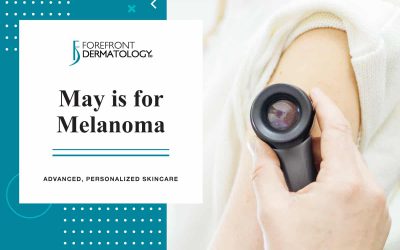 May is for Melanoma | Forefront Dermatology